A History of Nephrology at UCSF 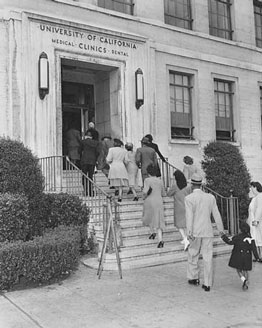 Nephrology at UCSF has a long and storied history. Although clinical nephrology in San Francisco goes back to the time of Thomas Addis (1881–1949), the quantitative assessments of body-fluid volumes and renal function really began in the 1950s with the studies of Isidore Edelman (1920–2004).

In pioneering experiments initiated in the laboratory of the noted surgeon Francis Moore at the Peter Bent Brigham Hospital in Boston, Dr. Edelman used isotope dilution techniques to characterize the volume and distribution of body fluids and electrolytes. He was recruited to UCSF in 1954, with his research laboratory at San Francisco General Hospital (SFGH). In a series of pivotal studies reported in the Journal of Clinical Investigation he described his results, which gave rise to what became known as the Edelman equation by which the serum sodium concentration could be viewed as a function of total body contents of sodium, potassium, and water. Eight of these articles emanated from his time at SFGH (then known as San Francisco Hospital), many of them reporting the results of such measurements in patients with edematous disorders. Read more.

The UCSF Division of Nephrology as it exists today is based on a rich foundation of pioneers, thought leaders, and visionaries in the field of Nephrology. Here we include brief interviews with several nephrologists who were integral in the development of the field at UCSF:

And a recorded Renal Grand Rounds by Frank Gotch, MD.